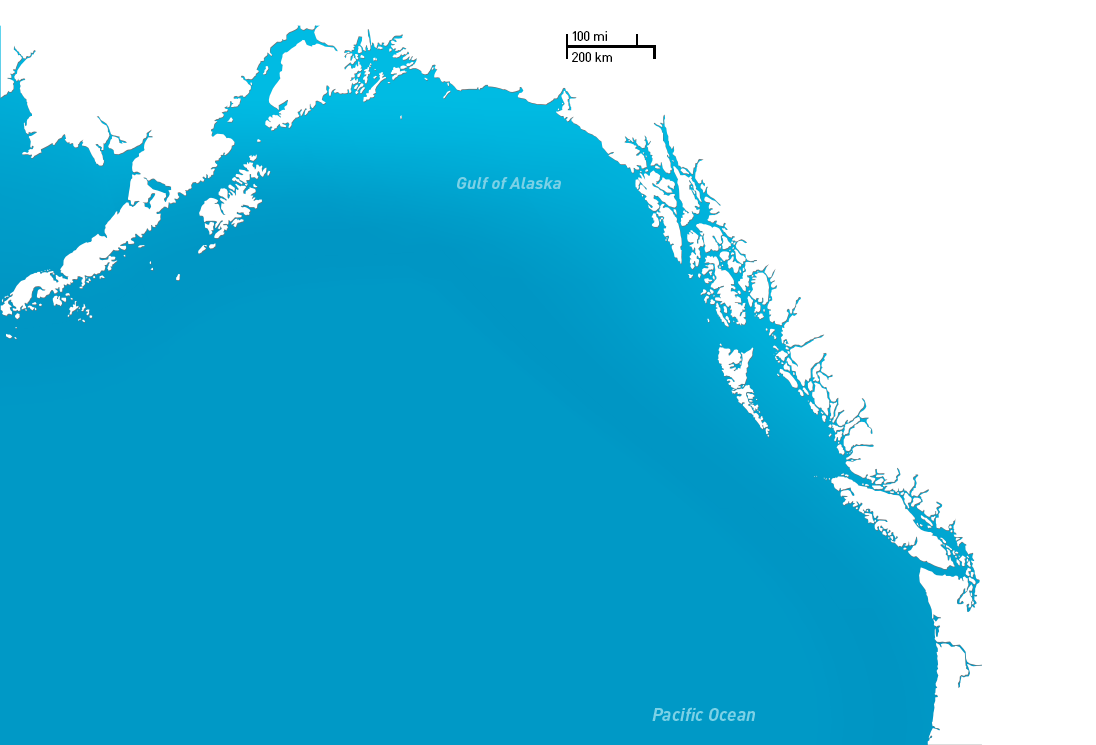 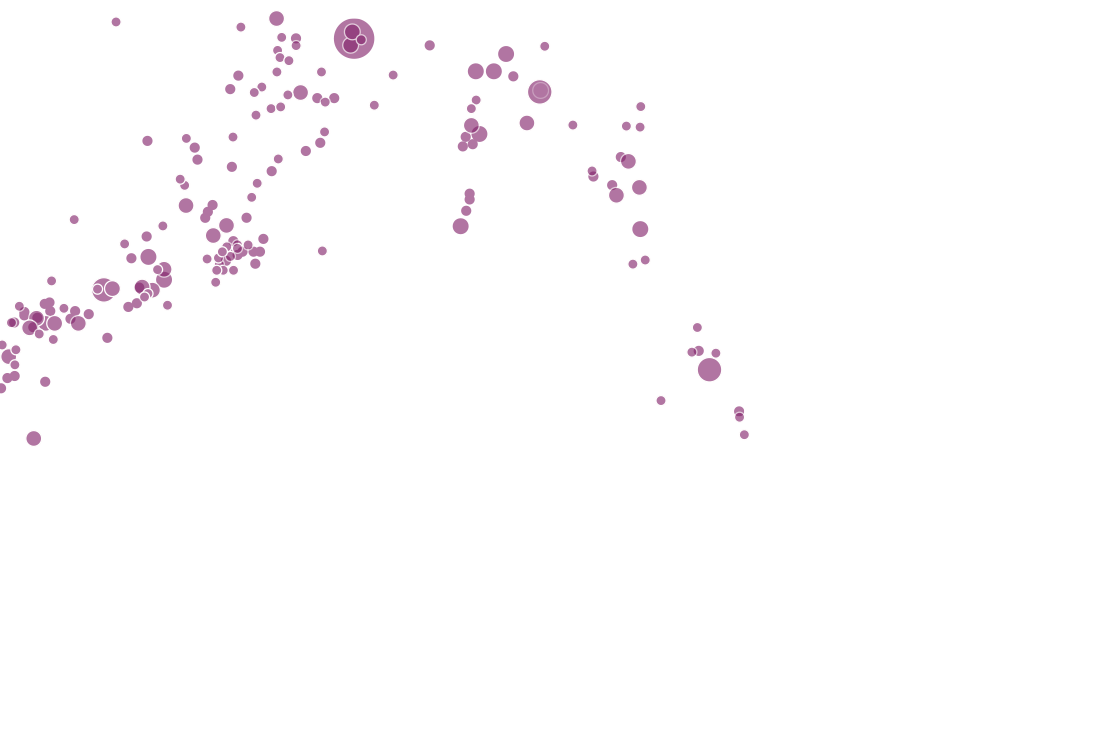 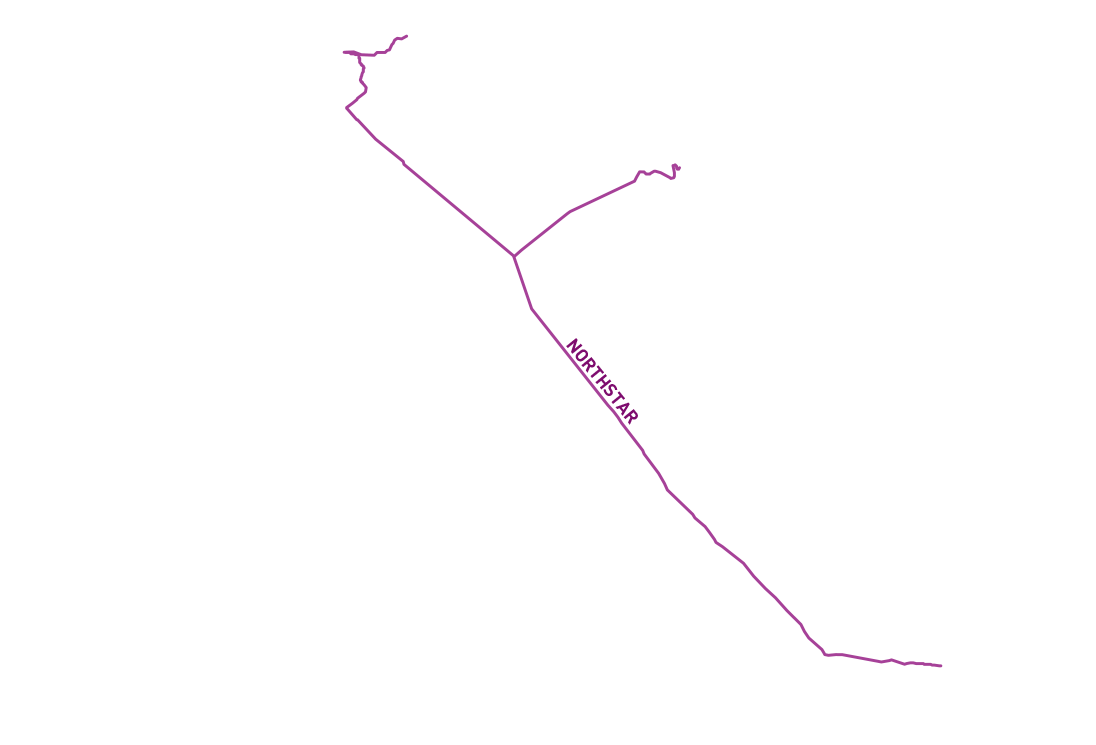 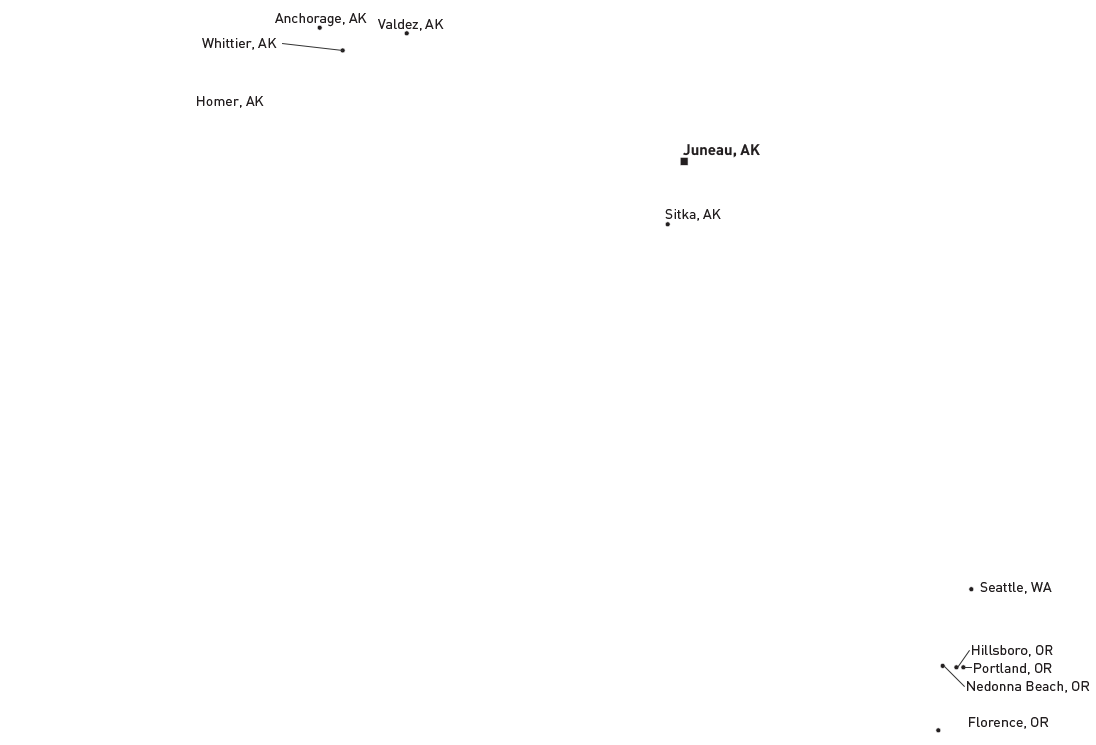 Alaska ranks high among the world's most seismically active areas. Circles on the map represent earthquakes over the last century with a magnitude of 6.0 and greater, though numerous lower magnitude earthquakes occur daily. The largest recorded earthquake in North America was a magnitude 9.2 that struck Prince William Sound, Alaska, in 1964.

ALASKA’S PROPORTION OF ALL EARTHQUAKES

Alaska experiences approximately 11% of the world's earthquakes and 52% of all earthquakes in the USA.

During the Great Alaska Earthquake of 1964, magnitude 9.2, land levels in the Portage area down-dropped as much as 9 feet, causing railroad tracks to buckle.

Magnitude 4.0: 15 tons
Feels like vibration from a nearby truck

Despite the fact that existing fiber-optic network cables that service Alaska extend from Anchorage south to Portage along Turnagain Arm, planners for the AKORN network identified this area as a particularly high-risk zone and intentionally chose an alternate route along Cook Inlet to avoid potential service disruption.

Seasonal snowfall at the top of Mt. Alyeska, located 10 miles north of Portage, is on average approximately 643 inches, or more than 53 feet. During the winter-season period of October, 2011 to May, 2012, the total for Mt. Alyeska was 975 inches (over 81 feet). That’s the equivalent height of a 7-story building.

The Turnagain Arm and Portage area are among the higher snowfall regions in Alaska with avalanches causing road and railroad closures nearly every winter. To reduce danger to public safety along the Seward Highway transportation corridor, it is common practice for the Alaska Department of Transportation to use artillery to blast avalanche-prone areas. Existing fiber-optic network cables run parallel to these same tracks.

During the Great Alaska Earthquake of 1964, magnitude 9.2, land levels in the Portage area down-dropped as much as 9 feet, causing railroad tracks to buckle.

Modern telecommunications has greatly increased the demand for bandwidth worldwide. Alaska Communications recognized the growing trend and evaluated the importance of connecting Alaska to the Lower 48 and the world.

HOW AKORN was Constructed

The team conducted bathymetric evaluation of the undersea path. They also worked with numerous Federal, State, and local agencies to obtain appropriate permits for landing site preparation and construction, and to minimize impacts to marine traffic and the fishing industry. 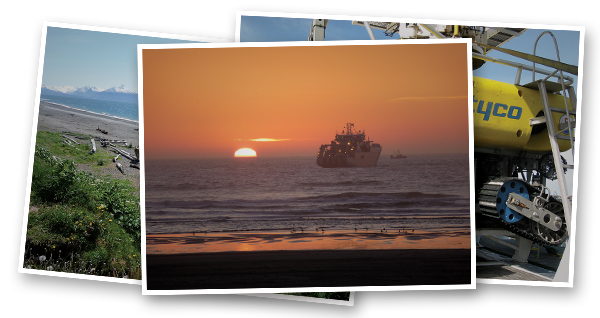 Construction of AKORN was conducted over a period of approximately 18 months, commencing with contract formation in August 2007, and subsequent permitting, property acquisition, and bathymetric study and determination of the undersea path. After testing and refinement, AKORN was implemented as a fully functioning fiber-optic network in April, 2009.

Among the most difficult and challenging portions of the network build was the section from Anchorage and Nikiski (approximately 40 miles). The waters of Alaska’s upper Cook Inlet experience some of the greatest tidal fluctuations in the world, upwards to 36 feet. The combination of cold water, strong currents, and extreme low visibility hampered construction progress. Completion required about 60 days – the equivalent period during which the entire section from Homer, Alaska to Florence, Oregon, about 1,800 miles was a completed.

The Kenai Peninsula overland portion of the network construction was conducted beginning in the spring of 2008 and concluded in September, 2008. Brush cutting and clearing was permitted during specific time periods dictated by the Alaska Department of Fish and Game, to avoid disruption to nesting of songbirds and bald eagles. As part of additional federal compliance requirements, Alaska Communications retained the services of an archeologist to walk the overland path from Nikiski to Homer, approximately 90 miles, with the ground-breaking crew. It was the archeologist’s responsibility to observe and record whether any artifacts from indigenous people (such as spear tips, arrow heads, fire rings, or burial sites) were encountered along the path. None were found.

Begun in July, 2008 in Homer, Alaska, this portion of the network construction was conducted over a remote area of ocean roughly equivalent to the distance from Cape Cod, Massachusetts to Jacksonville, Florida. Selection of the undersea path was conducted well in advance of the actual cable installation, with specific attention to avoiding undersea obstructions or hazardous terrain. Installation was slowest near the coastal areas where the cable was actually targeted for burial at a minimum of 3 feet. In the open-ocean areas of the installation, special care was taken to avoid disruption to commercial fishing and shipping. The greatest ocean depth encountered during deployment exceeded 15,000 ft. To ensure that the network installation was being successfully conducted, test data was continuously streamed over the cable during deployment. Total installation took approximately 60 days. The AKORN network cable made final landfall at Florence, Oregon in late August, 2008. 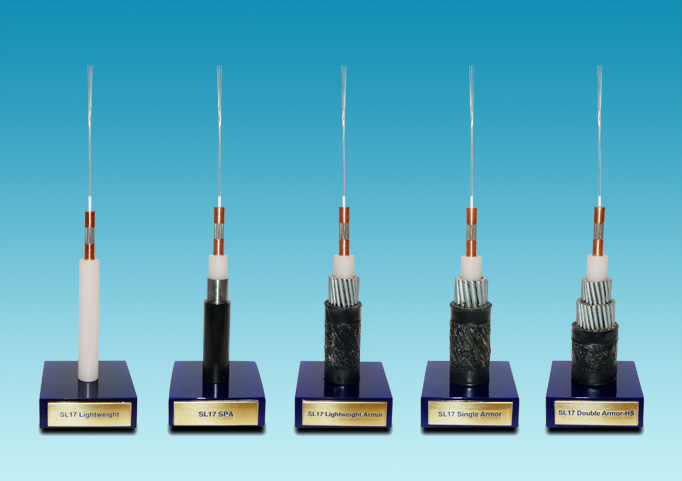 The AKORN Network undersea fiber-optic cable varies in outer diameter and weight, depending upon its proximity to land, exposure to risk, and ocean depth. Heavily-armored cable is used in shallow-water areas to avoid potential damage. Using the heavier-weight cable in deep-water is neither practical nor desirable, since the cable would actually snap under its own combined weight during deployment from the installation vessel.

To eliminate the possibility of damage from boating and fishing activities in all areas where water depth was less than 4,500 feet, the network cable was buried on the seafloor at a targeted minimum depth of over 3 feet. As the cable moved further offshore, progressively lighter armor was used as water depth increased, and damage risk decreased.

The lightest cable provides greater flexibility to adjust to changes in the seafloor, including seismic uplift and down drop or other under-sea topographic changes.

WHAT AKORN brings to Alaska

The AKORN fiber-optic network provides geographic diversity from other networks and redundancy in case of unforseen circumstances or natural disaster. The cutting-edge technology integrates seamlessly with the Alaska Communications statewide data network, the finest in the state. First put into service in Q2 of 2009, AKORN is a testament to Alaska Communications’ commitment to providing Alaska with the best end-to-end telecommunications solutions.

The AKORN Network provides robust and reliable performance and is seamlessly integrated with our Alaska data network, the finest in the state.

Our data network services provide business connectivity for multiple locations across town, across the state, or nationwide. Learn more about our Business Products and Services or contact a Business Sales Representative for more information.